Do We Still Believe In The Declaration of Independence? 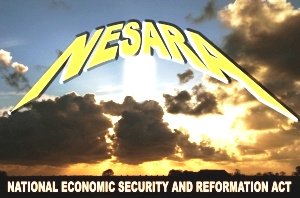 Like many of you, I have been learning about the true and heretofore hidden history of these so-called united States of America and the many 'conspiracies' that have kept this information from "We The People."

We of Ashtar's Legacy and friends have been focusing devotedly on helping to bring about the announcement and enactment of the National Economic Security and Reformation Act - NESARA - "signed into law" in September 2000.

What has always remained obscure is how this enactment was to come about when anyone with knowledge of this "law" was forced to sign a non-disclosure agreement on pain of death.  So for over 15 years, we have expended our focused energy on educating ourselves and anyone who would listen about this "law" and its assumed provisions,* and on supporting politicians we felt would help our cause without violating their non-disclosure contract.

It is past time we all acknowledge that despite the noble wording of the Declaration of Independence, due to hidden legal contracts going back centuries, we have never truly experienced the declared independence in reality.

Its ideals are what inspired patriots in three bloody wars, in 1776 and in 1812 against England, and the Civil War for the cause of maintaining unity among the States in the name of life, liberty and the pursuit of happiness for all.  The union would have long since collapsed without that founding Declaration as the enduring goal.

And in that continuing pursuit, the NESARA Law was drawn up and signed to correct what were seen as the major shortfalls of our existing government in meeting these ideals.  It is now obvious that these ancient secret contracts must be ended before we can begin to implement any of its provisions.

Why then are we allowing ourselves to remain so bitterly divided between the artificially created political parties that we cannot even speak to each other, and refuse to educate ourselves on the other side's point of view?

We have learned by now that the so-called mainstream media is deliberately created to keep us at each other's throats, rather than informing us in depth of all sides of an issue so that we can make informed decisions.

All through this mission of promoting the reforms of NESARA, until recently I and many others were seduced into believing that only the Democratic Party had the correct views on the issues, while others believed in seemingly opposite so-called Republican Party views.

It was not until the shocking election of Donald Trump that I and others began to question and wonder what had impelled the majority to vote for an outsider, a man who campaigned on "making America great again," that I among others began to remember what we had learned over the years about our true history, and why the reforms of NESARA were needed, and how this election was related to its implementation.

When my most trusted spiritual teachers reminded me of what we had learned of the known proclivities of his opponent, and that we could not afford the continuing wars that would have followed with her election to the Presidency, that I realized this President's election, whatever one thought of him, was the only way to prevent such a calamity.

And the truly inspiring tidbit of information provided was that this President would be paying off our national debt, thus freeing us from the Federal Reserve and their overlords, one of the main points of the very NESARA Law which we had been promoting for so long.

With this information, I began researching all the alternative sources that seemed rational, to understand why this President was acting so differently from what we had come to expect of our Presidents. None of his actions seemed completely rational at first glance, and gradually I came to realize that one reason was because he refused to be 'politically correct.'  He simply spoke his mind in language ordinary people spoke among themselves.  Being politically correct had gotten us nowhere and only continued the propaganda war of the respective parties which were dividing us.

Also, after months of pursuing this alternate research and by suggestion of friends who were doing the same, I began to read the "Q" source decodes of the strategy behind this Administration's actions.  This was extremely enlightening, though very hard to hear in many cases, because it brought out disturbing information that had previously been unknown, on behind the scenes actions, manipulations, and motivations of our heretofore trusted politicians and those behind them.

It has become very clear why NESARA has not been able to be announced and enacted.  It is also clear to me that President Trump and his Administration may just turn out to be the only one currently who has the ability to clear the way for at least parts of NESARA, perhaps not by that name, to be implemented in reality, and not just hoped for.

My current belief is that we must drop the idea of warring political parties and begin to look at all perspectives on important issues, and talk to each other in the spirit of understanding the reasons for the differing positions. And how else can we demonstrate the Love, Compassion, Forgiveness and Gratitude as well as the  Life, Liberty and the Pursuit of Happiness of the Fifth Dimension?

It seems to me that only by looking beyond our many differences to a higher road may we move forward to finally achieving the goals of our Founders, for the common good of We The People.  In that sense, we must aim to make America truly as great as our Founders envisioned - beginning with nullifying old contracts and enacting the reforms which NESARA outlines - great enough for the Fifth Dimension and the Golden Age.

The biggest realization in all of this is that no one person can do this alone.  It requires all of us thinking for ourselves and yet working together in good faith. True sovereignty and independence of a nation obviously depends on the sovereignty of each individual.

As we lightworkers like to say, we as empowered individuals, are the ones we have been waiting for.  So let us drop the divisive impeachment attempt, and work with this Administration and each other, to finally achieve the founding vision we all desire.